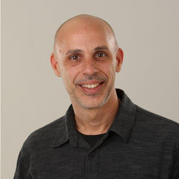 “Meet the man behind your t-shirts and promotional items, Steve Salvo. Steve was hired in 2008 as our Promotions Production Manager due to his extensive experience. Steve runs our Promotions Production floor and brings much experience from the apparel printing and embroidery industry to Data Graphics. Prior to being Production Manager at DG, Steve was a Production Manager at a major collegiate sports printing shop in Leesburg, Florida. Prior to that, he was a graphic designers for an area magazine. Steve joined the military in 2002 and was in the 82nd Airborne Unit serving our country overseas. He completed a combat tour in Iraq from 2003 through 2004. Steve left the service in 2007 and shortly after joined the DG team. Born and raised in Brooklyn, NY, Steve moved to Florida in 1978. In Steve’s spare time, he enjoys riding his Ducati in the Central Florida area. However, he enjoys riding in the Tennessee mountains the most. Steve is also the father of two kids, Emily and Josh.”